In the fall of 2013, UDA retained Peter Wright of QFCRE  to locate a new urban location to accommodate their unique teaching approach. Wright identified many off-market opportunities and facilitated numerous “test fits” to verify suitability in Downtown and surrounding areas.  Under Wright’s consolation, UDA ultimately chose the 1328 F Street in Downtown San Diego and help secure $10.5m of bonds to fund the construction of the new charter school.

Time is of the Essence- In 2008 Urban Discovery Academy moved into a vacant hospital located at 2850 Sixth Avenue in Banker’s Hill. The building was scheduled for redevelopment and with a buyer on the hook the landlord did not want renew UDA’s lease beyond July of 2014. This put the charter in a difficult position: (1) either find a new suitable location or (2) close its doors.  After 12 months of searching and analyzing the top picks, UDA chose the F Street location in the San Diego’s up and coming East Village. The first problem with the site was that UDA needed nine (9) months to build the new facility and construction could not commence until the fall of 2014. Wright quickly advised UDA to secure short term solution with the San Diego School District, who had a former school site that would work for UDA until the 14th and F site would be built. Securing this one (1) year holdover site was key to buying the school the time they needed for the new facility to be built in the East Village.

After Wright helped locate the 14th and F site and the schools board approved it, the first phase began with securing a ground lease from the San Diego Community College District (SDCCD). This was considered a “key step” in negotiations since another local developer had already tied it to build multifamily or do a build to suit project. However, the developer had not secured a Tenant and were not in a position to secure financing, and the clock was ticking. Wright leveraged these two key ingredients to eventually take out the middle man and have UDA ground lease the site directly from the City College. The financing phase occurred simultaneously as site securitization took place. However, this also meant that UDA had to secure the financing to build a new 37,100 SF school. UDA sought out bond financing through Procopio Cory Hargreaves and RW Bard. Thanks to UDA’s track record and leadership, they received a higher than expected bond rating. Shortly after the bond was taken to market and UDA received $10,500,000 in financing to build the project. In August, following the site selection and capital raise; UDA appointed Peter as a director of their newly formed real estate holding company where he oversees $1m of regulatory bond payments.

This is the first new ground up charter school that has been built in Downtown San Diego 92101.

Wright is no stranger to the East Village; he has leased/ sold over 100,000 square feet in the hot sub market and continues to gain popularity in the “charter school real estate world”. 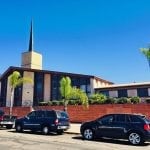 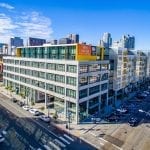